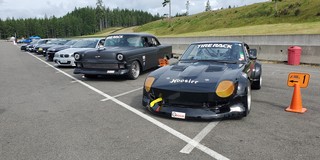 A small but enthusiastic group of drivers navigated not only the amazing 2.47-mile twisting ribbon of a track that is Ridge Motorsports Park, located in Shelton, WA, but also the occasional downpour on the first day of the Tire Rack SCCA Time Trials National Tour powered by Hagerty. The weather may have dampened the track, but it didn’t dampen the drivers’ spirits. With the sun breaking out of the clouds on Sunday, the times dropped as hard and fast as the rain had the prior day and all the competitors had a chance to experience the epic rollercoaster of a track known as The Ridge.

Consistent with prior Time Trial National Tour events, all SCCA participants were asked to follow SCCA’s COVID-19 Event Guidelines for the weekend, including wearing masks within the designated public spaces, like registration, tech and other shared facilities. Diligently following the guidelines, participants came together to experience the thrill of driving on track, showing a willingness to put forth the extra effort in exchange for some long-awaited fun on track.

Kevin Atkins traveled all the way from Poway, CA, to take part in the SCCA Time Trials event at The Ridge in Shelton, WA. The trip was oh so very worth it as he made massive improvements in both his time, and overall driving. Dropping almost 25 seconds from his Saturday sessions, and another 9 seconds from his morning Sunday session, Kevin found huge improvements all throughout the event. It was these great improvements that earned him the Most Improved award for the weekend.

Fastest Novice went to Ryan Breezee from Renton, WA, who showed up in a gorgeous 1969 Camaro SS running in Max 1. While he wasn’t able to win his class, he did lay down some incredibly fast times, and managing to place second to the overall fastest driver at the event.

Benjamin Cort drove up from Portland, OR to compete in his F-Prepared autocross 1977 Datsun 280z. It was the very first time on track for the Datsun. Cort, a longtime autocrosser, couldn’t help but come experience the exciting track in his super cool old school Datsun, making him an easy choice for Breakthrough Performer for this event.

David Freiboth seems like the type that might live by the motto of, “Speak softly, and carry a big stick.” David, or rather his vehicle of choice, was the epitome of nonchalant, in a sea of “look at me” cars competing in the Global Time Attack and SCCA Time Trials mixed event. Maximizing each session, rain or shine, you would find Freiboth out there turning laps until the checkered flag was thrown in his stock 2010 Ford Focus 2 door coupe. You could he was there simply to maximize his smile per miles.

Rio Rios was an extremely easy choice for the Time Trials Champion award. A stalwart in the Oregon Region of SCCA, Rios has been a huge proponent of the Time Trials program since the National Tour made a stop at his home track, Portland International Raceway last year. Since that event, Rios has been actively engaged developing the Time Trials program in his Region, and is hoping to have an awesome calendar of great tracks for people of the Pacific Northwest to be able to run. He also volunteered to help and was a large part of making the event at The Ridge as successful as it was.

You didn’t need a Chevrolet Camaro ZL1 1LE to be in the top five fastest cars at The Ridge, but it didn’t hurt! Three of the five overall fastest cars were sporting the classic Bowtie and a big wing. One of the two cars to break that mold was the fifth fastest driver, Jim Larfield, in his Lotus 7 replica running in Unlimited 2. Just ahead of him was the first of the ZL1’s, driven by Steven Zimmerman who was competing in Tuner 1. The third fastest overall was the V6 swapped Toyota MR2 of John Tritsch running in Prepped 2. The battle for the top spot was between a Sport 1 ZL1 driven by Ryan Otis, and a Max 1 ZL1 driven by Tony Scalici. Tony would take top honors on the weekend by just 5.7 seconds, with an overall time of 5:25.976, and a fast lap of 1:47.761.