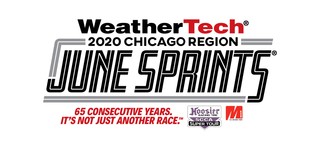 The 65th annual WeatherTech Chicago Region® June Sprints® were again part of the Hoosier Racing Tire SCCA® Super Tour. It was 1956 when the first full season of racing began at Road America, and the June Sprints was part of that year’s schedule. Back then, the June Sprints was a component of the SCCA National Sports Car Championship, a series determining SCCA champions prior to today’s Runoffs® format. In 2020, the Runoffs return to Road America in October -- and winners from this weekend’s June Sprints certainly should be considered as “in the running” to claim an SCCA National Championship this fall. What did the victors have to say about their triumphs? Find out in post-race winner videos below.

The premier U.S. amateur road racing series, Hoosier Racing Tire SCCA Super Tour is comprised of an exciting eight-weekend schedule in 2020 that brings together top SCCA competitors from throughout the country. Visiting some of the greatest tracks in North America, each weekend consists of two races for each of 28 different car classes. From GT cars to production vehicles, formula cars to prototypes, the Hoosier Super Tour packs a ton of great action into each and every weekend.