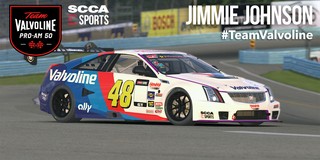 The Valvoline ProAm 50 matches Valvoline’s line-up of real-life and virtual racing stars against a roster of SCCA members who have proven their mettle in weekly events as part of the Hoosier Racing Tire SCCA eSports Super Tour.

Why the NASCAR Cup Series configuration? Because the Team Valvoline Pro drivers are led by a host of NASCAR Cup drivers from Hendrick Motorsports, including seven-time champion Jimmie Johnson, and a field of drivers from Burton Kligerman eSports.

The race is available for streaming live on YouTube and SCCA’s social media channels beginning at 5 p.m. ET this Saturday, April 25th with a 10-minute qualifying session, followed immediately by the 20-minute race.

Jimmie Johnson: Even in his final season of full-time racing, the Hendrick Motorsports stalwart is one of the most accomplished drivers of any motorsports era. The seven-time NASCAR Cup champion (equaled only by Richard Petty and Dale Earnhardt) is the only race car driver in history to be named Associated Press Male Athlete of the Year.

Chase Elliott: The son of NASCAR Hall of Famer Bill Elliott now has his own impressive racing resume. Elliott is the 2014 NASCAR Xfinity Series champion, the youngest ever, and 2016 NASCAR Cup Series Rookie of the Year. He has won the last two NASCAR Cup “real world” races at The Glen.

William Byron: The 22-year-old is now the pilot of the famed Hendrick Motorsports No. 24 machine. Byron earned rookie of the year titles in all three of NASCAR’s top series, each in consecutive years, and doubled up in the Xfinity Series by also collecting the series championship in 2017.

Alex Bowman: The two-time NASCAR Cup Series race winner joined Hendrick Motorsports in the No. 88 at the end of the 2016 season and has remained with the team ever since. He was off to a hot start in 2020 after bringing home the win at Auto Club Speedway in March after leading 110 laps out of 200 total.

Ray Evernham: The three-time NASCAR Cup Series champion as a crew chief for Jeff Gordon has recently resumed his driving career in vintage racing. Evernham has been a team owner and worked in television, currently hosting the show AmeriCARna on Velocity.

Parker Kligerman: Parker Kligerman has run a partial NASCAR schedule as a driver for the past couple of seasons while also working as an analyst and pit reporter for NASCAR broadcasts on NBC. He formed Burton Kligerman eSports with Jeff Burton to run in the NASCAR Pro Invitational.

Ashton Crowder: The 17-year-old is a Burton Klingerman eSports driver, competing in the eNASCAR iRacing Series. Crowder currently sits ninth with one win after five rounds.

Tom O’Gorman: Tom O’Gorman is an SCCA racer with a knack for driving any car he can get his hands on. A winner of four SCCA autocross national championships, two SCCA ProSolo Championships, two World Challenge season-long championships, and multiple IMSA race winner, he can still be found weekly competing in the Hoosier SCCA eSports Super Tour.