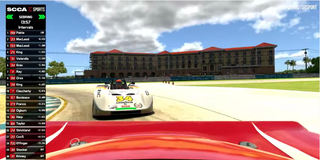 The racing was intense in five separate run groups, all streamed live for spectators.

Spec Racer Ford: After three rounds, one thing is clear – if Caleb Patrie is in the iRacing field, he’s going to be near the front. On Saturday at Sebring, he escaped the Spec Racer Ford race with his first Hoosier eSports Super Tour win of the season following several podiums and near-misses.

It didn’t come easy, of course. A five car battle with 10 minutes to go consisting of Patrie, Larry “the old man” MacLeod, Jackson “the son” MacLeod, Max King and Max Grau had pulled away from the second wave of competitors and were in position to settle the battle for the podium themselves.

With just a lap to go, the elder MacLeod made the decision to attempt a pass around Patrie for the lead. When that didn’t work, he shuffled all the way back to fifth. It did open up an opportunity for Jackson to move to second around Grau, however, but gave Patrie the opening to run for the checkered flag.

“The start was great,” Patrie said. “Max got a pretty good jump and I followed him through. My plan was to hold my position as best as possible. I knew I wouldn’t be able to shake those guys since they were in the draft. I just knocked off consistent laps, not making any mistakes, and just tried to hold them off.”

Touring: The Touring 1 field of Porsche Caymans was led to the start by polesitter DJ Alessandrini who was flanked by Paul Darling. As soon as the green flag waived, the field spread out and looked to be five-abreast going into turn one. Tom O’Gorman, who started fourth, positioned his car expertly on the inside of Alessandrini and procured the lead within a couple corners. However, two competitors fighting for fourth came together later in the opening lap, resulting in the two Porsches sliding across the grass and slicing through the next turn, collecting both O’Gorman and Alessandrini. With luck, Darling avoided the incident and assumed the lead, followed by Eric Kutil, Ido Waksman and Tony Chow.

Kutil slowly reeled in Darling the rest of the race until he was right behind the frontrunner with only a couple laps left to run. Corner to corner, Kutil put on the pressure as the duo worked through traffic. But on the last lap, Kutil lost control of his car, leaving Darling to scamper away to victory. Chow managed to move up and claim the second spot, followed by Nicholas Johnston in third, Waksman in fourth and Michael Ogren in fifth.

The Touring 2 (T2) race, made up of Ford Mustang FR500S vehicles, got off to an interesting start as polesitter Paul Slavonik was left in the dust by William Collins, Robert Korzen and David Swig. By midrace, Slavonik had made up the ground lost and took the lead from Collins as Daniel Richardson and Bryan Horowitz also closed in. Slavonik went unchallenged the rest of the race and brought home the T2 win.

Meanwhile, Richardson and Horowitz had gotten around Collins and were having a tremendous battle. Jeff Jacobs sat patiently behind those two, just waiting for an opportunity. On the last lap, that opportunity presented itself as Richardson pushed a little too much and spun into a wall. That allowed Horowitz a clean run to finish second and Jacobs moved up to third. Richardson got across the finish line for fourth, and Robert Long finished fifth.

Skip Barber F2000: It’s generally accepted that iRacing is a very realistic simulator. It’s also accepted that it is still a computer program, subject to the inputs it is given.

That is how the Skip Barber F2000 field got to try the first standing start of any Hoosier Super Tour event, both live and eSports. Fortunately, none of the crash damage will require any late nights in the garage.

A big turn three pile up sent cars flying and tumbling (and because this is a virtual race, the only injuries were to pride) and allowed Zachary Rivard, Dylan Christie, Jeremiah McCintock, Richard Spicer and Nicholas Johnston to lead early on, in order. Chrisie and Rivard swapped the lead several times during the first two laps, a harbinger of the action to come.

With 11 minutes to go, the look had changed. Rivard, McClintock and Christie were the lead group, followed by former SportsCar coverboy Kenton Koch, Spicer, and Justin Hille two seconds behind. Hille and Koch had started tenth and eleventh, respectively, cleared the first lap incident and worked together with a draft to close the gap on the leaders. One lap later, those two groups were together in a six car lead pack.

With four to go, Christie and McClintock came together, and the final laps were to be decided by Koch, who had made the lead, Rivard, Spicer and Hille.

Driving defensively on the final lap, Koch was a sitting duck down Sebring’s long back straight. Koch, Rivard and Spicer entered the tight Turn 17 three wide, with Rivard and Koch touching. Spicer came through cleanly and held off a strong final corner by Hille to win by 0.108-second, with Rivard completing the podium and Koch recovering from a spin to finish fourth.

Big Bore: Chris DeShong led the GT-1 Cadillac CTS-V field to the start and jumped to an early lead with Mike Leeder and Lawrence Loshak falling in line behind. Five minutes into the race, Leeder gave DeShong a bump from behind going into a turn, which spun DeShong and essentially ended his chance at a win.

Soon after that incident, Loshak got around Leeder for the top position. And while Leeder applied copious amounts of pressure at times, Loshak was steadfast and brought home the win. Leeder finished second, Ellis Spiezia third, Justin Tsang fourth and Todd Lamb fifth.

The Porsche 911 Cup car of DJ Alessandrini led the GT-2 field to the start Saturday. He quickly developed a big gap on the field and was never challenged as he marched away to the GT-2 victory. Paul Darling brought his car home second, followed by Max Grau in third, Sean Velandia fourth and Tyler Maxson in fifth.

In GT-3, Kyle Herbst and his Audi RS 3 LMS TCR vehicle took pole and the early lead with Andrew Pallotta, and Tom O’Gorman giving chase. Within a handful of laps, O’Gorman had moved to the front and it was Herbst’s turn to fill up the leader’s rearview mirror.

Past the race’s midpoint, Herbst slipped back and it was Pallotta’s turn to hassle O’Gorman. Then with about two laps remaining, Pallotta lost contact with the leader and fell back into the clutches of Herbst. But Herbst tangled with race traffic to gift the second spot back to Pallotta. Herbst recovered to claim third. Darin Treakle was fourth and Eric Kutil fifth.

Global MX-5 Cup: The fun of the iRacing version of the Mazda MX-5 is the same as the real-life version: a big draft, a predictable car and the ability for (some) contact is always a formula for great racing.

Following some action, that previously mentioned contact, and some spins by challengers, DJ Alessandrini and Robert Kucera had broken away from the field. After sorting out some side by side battles and lead swaps, Alessandrini drove well to the inside down the backstraight and into the final turn one last time.

Kucera tried the only option available to him – running the long way around the outside of the track to the finish. Alessandrini carried enough speed to hold Kucera off, taking the win by 0.134-second.

The Hoosier SCCA eSports Super Tour continues next week at VIRginia International Raceway. Each run group is open to 40 SCCA members, which includes practice before the streaming qualifying and race.

More information can be found at SCCA’s eMotorsports page here.