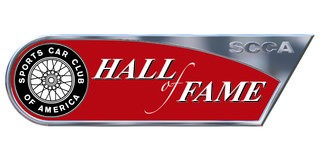 TOPEKA, Kan. (Dec. 5, 2018) -- Another seven individuals, all who have made significant contributions to the Sports Car Club of America® and world of motorsports, have been announced as the Club’s newest Hall of Fame class, adding their names to a list of timeless superstars. David Ammen, Dr. Frank Falkner, George Follmer, Patricia "Patc" Henry, John McGill, Dorsey Schroeder and Henryk Szamota make up the 2019 Hall of Fame class which joins the prestigious ranks.

As usual, this current group will be formally inducted during the SCCA® Hall of Fame and Awards Banquet. That event takes place Saturday, January 19 and serves as the capstone of the three-day SCCA National Convention taking place again in 2019 at the South Point Hotel and Casino in Las Vegas, Nevada.

Along with the accomplishments of all previous inductees, the new Hall of Fame members listed below helped position the building blocks that elevated SCCA’s stature in the world of motorsports over the last 75 years.

David Ammen
An SCCA member for more than 60 years, Ammen spent nearly half that time as a competitor who made nearly 20 National Championship appearances through the ‘60s, ‘70s and ‘80s.  An accomplished driver, the New England Region member is also well known for his hard work behind the scenes. He was a Road Racing Steward until the 2000s, participated on the Competition Committee, served consecutive years on the Board of Directors, and is a Woolf Barnato Award winner.

Dr. Frank Falkner
Born in England, Dr. Falkner moved to the United States in 1956 and soon joined the Sports Car Club of America where he became a Regional Executive and helped host an SCCA National Convention. In 1960, Dr. Falkner became a member of the newly formed SCCA Competition Events Committee, and served as the Committee’s Chairman one year later.  It was during his tenure that the Club introduced the Stewards program. Also during the ‘60s, Dr. Falkner was elected to the SCCA Board of Governors, became Vice Chairman in 1965, and Chairman of the Board a year later. After retiring from the Board of Governors, he became a member of SCCA’s Professional Competition Board and was a Woolf Barnato Award winner.

George Follmer
Follmer started racing in 1959 and was immediately successful. Over the following two decades, he competed in virtually every form of racing, including the United States Road Racing Championship, USAC, NASCAR, IROC, Fast Masters, SCCA’s RaceTruck Challenge, Formula 5000, Formula One, the World Endurance Championship, IMSA, and both SCCA Trans Am and Can-Am. In 1972, he earned the unique honor of winning the Trans Am and Can-Am championships in the same year -- the only driver ever to have done so.

Patricia "Patc" Henry
Henry has been a member of SCCA for 54 years. During the first 18 years of her membership, she was a vital member of the Nebraska Region, filling many positions and winning many awards. And while her string of accomplishments in the early days left a strong impression on the SCCA locally, it is her work both in SCCA Road Racing and SCCA Pro Racing for which she became nationally and internationally known. During her ten years at SCCA Pro Racing, her detailed and dedicated work made her a fixture on the professional sports car racing scene in the United States. Henry later moved to the SCCA Road Racing department and became known for her extraordinary work in managing all of SCCA’s Road Racing activities.  In that role, her experience guided a booming racing program and its crown jewel – the National Championship Runoffs®.

John McGill
McGill was a longtime member of SCCA and a Regional Executive of the Mahoning Valley Region. But what he’s perhaps best remembered for is his untiring work as track manager of Nelson Ledges Road Course in Northeast Ohio. During his tenure at the track, McGill helped bring about use of “tire walls” to improve safety. Because of his dedication, SCCA created the John McGill Award in 1975 that honors those that make a significant contribution to the Road Racing program, and McGill was the first person to receive that award.

Dorsey Schroeder
One of the youngest drivers to earn an SCCA competition license more than 45 years ago, Schroeder went on to become an accomplished competitor in SCCA Road Racing, SCCA Pro Racing, IMSA, IROC, Grand Am, ARCA and NASCAR. He has been a broadcast television race commentator for many years and continues to serve the motorsport community today as Chief Steward of SCCA’s Trans Am presented by Pirelli. Additionally, Schroeder is Competition Director for the Historic Sportscar Racing (HSR) series, and formerly worked as Race Director for Pirelli World Challenge.

Henryk Szamota
A member of SCCA’s New York Region since 1950, Szamota was an active and dedicated SCCA competitor, supporter and patron. His commitment progressed through Region involvement that included Race Chairman, Assistant Regional Executive and many years as Regional Executive. Beyond his own region, Henryk is credited with founding the North Atlantic Road Racing Championship (NARRC), collectively run by the New York, North Jersey, Mohawk-Hudson and New England Regions for many years. In 1961, Szamota was elected to the National Board of Governors. There he served for 14 years, but then decided fresh leadership was instrumental for the Club and helped create the two-term Board of Directors limit that stands today. For his work and dedication to the Club, Szamota received in 1977 the Woolf Barnato Award.

The purpose of the Sports Car Club of America Hall of Fame is to preserve, protect and record the history and accomplishments of the Club for current and future members by recognizing those members who have had a significant impact on the Club and the sport. This may be through service to the national organization, achievements in competition, advancement of the sport, or bringing recognition to the SCCA.